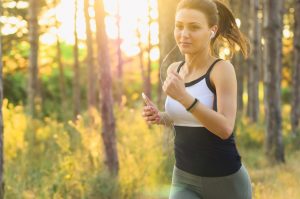 If you don’t spend much time outdoors, maybe you should reconsider that decision. There are a lot of benefits you can derive from getting more outside time, rather than spending all your time inside. The summer heat can be quite a deterrent, so early in the morning is a perfect outside time. Studies show that just walking around outside surrounded by greenery, such as in a park or woods, compared to walking city streets, provided a benefit for memory and mood. People walking in a botanical garden or park scored higher on memory tests by 20% compared to those walking in the city. Another study showed that walking in the glory of Mother Nature also helped depressed individuals remember better.

How do you measure stress. One method is to measure the amount of cortisol in the system. Cortisol is a hormone created by stress. There are several studies that show that spending time in a forest can help lower cortisol levels, as well as improve memory. It’s often called forest therapy. There’s a reason many people escape the city on weekends and relax camping in the woods. It simply refreshes their system. In fact, workers with a window that has a natural view show improved job satisfaction.

You’ll be healthier with reduce inflammation when you spend time with Mother Nature.

The great outdoors is more than just relaxing and beautiful, it has the power to reduce inflammation, too. Inflammation occurs as a response to a threat on the body. It might be something as simple as catching your finger as you close the door or as threatening as a harmful virus or bacteria. You can get too much of this necessary function. The body can actually be damaged from increased inflammation, which ends with a wide variety of conditions from depression to cancer. One study showed that seniors that spent a week in the woods not only lowered inflammation levels, but also blood pressure.

Did you know that you could improve your eyesight with a trip to the woods?

Studies of 2,000 schoolchildren showed that children who spent time outdoors were less likely to develop nearsightedness and lowered the potential of it getting worse. That same protection wasn’t afforded to those that spent time playing sports inside, so the difference did not come from being more active. Another research study showed that increasing outside play during recess lowered the risk of nearsightedness by 8 percent.

For more information, contact us today at Iron Fit