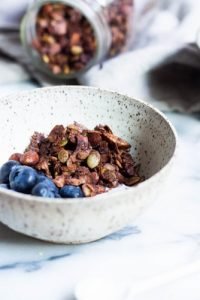 Unless you live under a rock, you’ve probably heard of the Paleo diet. The concept of the diet is intriguing. Simply put, it’s eating the foods your ancestors would have eaten. That doesn’t mean your grandpa who loved his fried bologna or your great grandparents. It goes back centuries to the very beginning. If we go back far enough, humans were eating like other primates, fruit, bugs and leaves. Then they evolved to hunter-gatherers and finally moved onto the concept of agriculture. Is Paleo right for you? Let’s take a look at what they ate and how it fares against today’s diet.

The paleolithic diet was better than today’s American diet in a number of ways.

Early man ate plenty of fiber, lots of protein and unsaturated fat. They didn’t eat chemicals in their food, either. They had more fresh greens and other produce that we eat today. In fact, they ate three times more. The paleolithic diet contained more vitamins and minerals, too. While we tout omega-3 fatty acid as something new and amazing, the paleolithic diet contained far more than ours does. They also didn’t have a salt shaker to season their food or any problem with trans fat.

You probably won’t eat exactly like your ancestors on a paleo diet.

There’s no doubt you won’t be living off the land and eating wild greens on your walk to work, but you can increase your intake of meat. Paleo diets include eating the whole animal approach, which includes organs, cartilage and bone marrow. Bone broth soup has become quite popular even among those not on a paleo diet. That’s because it contains a number of nutrients. Paleo diets also contain other animal products like honey or eggs. It contains fruits and vegetables, raw seeds and nuts and some added fat such as coconut oil, avocado and butter—from grass fed cows. Paleo diets don’t contain legumes or grains.

Some of the logic of the paleo diet is true.

If you like grain and beans, you’ll miss them in the paleo diet. The same is true for many dairy products. While a paleo diet contains many healthy foods and is far superior to the way the average American eats today, it’s simply not for everyone, nor is every justification in the diet true. Beans contain phytates or lectins that supposedly wipe out the nutritional benefits of legumes. That’s not true. It does wipe out some of the benefits, just as oxylic acid interferes with the absorption of the calcium in spinach. Unlike the spinach, much of the nutritional benefits of legumes benefit the body.