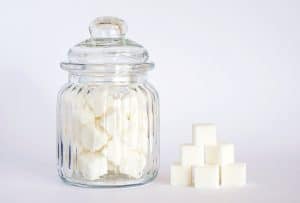 What is monk fruit? It’s a fruit that looks like a smaller version of a watermelon and was grown by Buddhist monks for centuries. Its home is southern China and northern Thailand, which is still where most of the fruit is grown. The outside rind and seeds are removed, then it’s crushed to remove the juice. That juice is dried down until it’s a powder that has the concentrated sweetness of the fruit and can be used as a sugar replacement. It contains glucose and fructose, like many fruits, but also contains mogrosides, making it 250 times sweeter than sugar, yet it has no calories, fat or carbs per teaspoon, according to the USDA.

Monk fruit was used in Chinese medicine for centuries.

One focus in Chinese medicine is the yin and yang nature of the body, with the yin being cool and yang being hot. Luo Han Guo—the Chinese name for monk fruit– helps balance the yin and yang, while the sweet taste slows down reactions and detoxifies, plus acts as a tonic. Western medicine has found that the sweet taste of this fruit with the low glycemic index is a great alternative sweetener for people with diabetes. It’s also helpful in preventing complications from diabetes. Some studies find that it not only doesn’t cause blood sugar to rise, but it may also reduce blood sugar levels.

Since it has no carbs or calories, it may promote weight loss.

Think of how many calories you might save if all the sugar in your diet had no calories. Also think of how important that would be for your waistline. While there’s research still going on to the benefits and drawbacks of monk fruit, most scientists believe that it could be a huge benefit to help control the epidemic of obesity and aid diabetics. However, just like many sweeteners can have unintended consequences, the same may be true of monk fruit. There’s simply not enough research to declare it the panacea for weight loss and other health issues.

The mogrosides that make it sweet also provide another benefit.

Monk fruit is best known for its sweetening properties, but it also has another benefit. It’s anti-inflammatory. It’s the mogrosides that make it super sweet that are antioxidants and provide that benefit. It also helps to slow the growth of harmful cells, has antioxidant properties and can aid in the prevention of chronic disease.