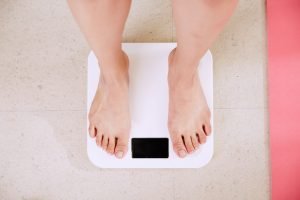 When I talk to people at Iron Fit in San Antonio, Texas, sometimes they question how well they’re workout is helping them with weight loss or praise the workout for helping them shed pounds. Then I find they’ve weighed themselves in the morning and after their workout to make that judgement. You can’t get an adequate read on your progress by weighing yourself every hour. For some, it can be counterproductive weighing every day. So how often should you weigh yourself?

If you get discouraged easily, weighing once a day may not be for you.

Your body goes through a number of changes every day, some are more permanent than others are. For example, if you just drank a ton of water and weighed yourself, you’d probably weigh more than you would if you didn’t. Sometimes, water retention that can occur for a day or two, can make a big difference if you’re hoping to shed that last few pounds. Water retention can cause you to weigh more for a short time and then disappear. It can be quite depressing to see, but isn’t because you’ve done something wrong. The reverse is also true. You can get a false picture if you weigh less after you’ve binged on food the previous day. It’s a negative reinforcement.

Another study countered that belief.

There are a lot of different studies with a lot of different results. Another study involving obese people had just the opposite result. The study lasted two years and showed that weighing more often actually helped the obese lose weight and reinforced new eating habits. It aided them in modifying their eating habits and preventing them from getting out of control.

It all depends on you and your personality.

While you won’t get an accurate picture in the short run, over the long term, no matter how often you weigh yourself, you’ll see the results. If you love tracking your progress, then by all means weigh in frequently, but just remember, your body weight fluctuates throughout the day and changes may not be permanent or show your real progress. Form your conclusions based on the difference in weight over a week’s time. You can use the information to chart your progress and include it in a weight loss diary.