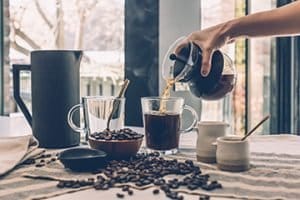 Whether you need your cup of coffee in the morning to get you started or have an energy drink before you workout at Iron Fit in San Antonio, Texas, a little caffeine can be helpful. A little caffeine isn’t bad, but when you ingest too much, it can have consequences. Just how much is too much caffeine? Is one cup of coffee okay, but two cups too much? Is one can of energy drink enough to increase your energy, yet two cans push you over the line, creating the jitters? When do you say enough is enough?

How much caffeine is safe?

Most people can consume as much as 400 milligrams of caffeine a day without facing side effects. How much is 400 milligrams? In terms of coffee, it’s about four cups of brewed coffee. If you’re drinking energy drinks, it’s approximately one 16 ounce energy drink, two energy shots or ten cans of cola. Since it varies, you need to check the label to see how much each one contains. More dangerous than those drinks is straight caffeine, either in pill or liquid form. It only takes one teaspoon of powdered caffeine to equal the amount in 28 cups of coffee.

Some people shouldn’t consume even an average amount of caffeine.

If you have children, keep the caffeinated drinks away from them. Excessive caffeine can easily be consumed with very little intake. Pregnant or lactating women should cut caffeine intake in half, ingesting less than 200 mg a day. For people who are sensitive to the effects of caffeine, even a small intake can cause side effects.

The effects caffeine can vary.

Caffeine is a stimulant. When you drink something that contains caffeine or take caffeine powder or pills, it absorbs into the bloodstream and goes to the brain where it blocks the neurotransmitter adenosine. That causes an increase in dopamine and norepinephrine, which boosts the firing of neurons. For most people, a little caffeine can improve the functioning of some areas of the brain. It can also cause the body to burn more fat, plus improve athletic performance.

You may think caffeine is only contained in soft drinks, energy drinks and coffee, but chocolate also contains caffeine. Dark chocolate coated coffee beans contain 336 mg of caffeine for 28 pieces.