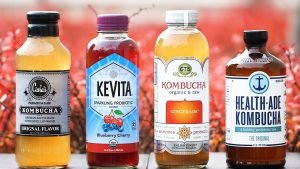 Kombucha has been around for a long time, but it’s never been so prominent in Western civilization as it is recently. It’s a probiotic drink that is made from a sweet green and black tea that’s laced with “a symbiotic colony of bacteria and yeast,” often referred to as SCOBY. Let’s say, it’s not pretty when it brews. It looks a bit like a flat mushroom pancake floating on top and smells a bit vinegary when you drink it. In fact, I’ve found a few Kombucha looking leftovers in the recesses of my refrigerator when I’ve given it a thorough cleaning. The SCOBY ferments the tea and the final product is Kombucha.

Just like other probiotic products, Kombucha has many health benefits.

The fermentation process boosts the healthy bacteria in the tea, just a fermentation boosts it in yogurt or sauerkraut. These bacteria help the digestive tract and by doing so boost your immune system. It’s estimated that about 80 percent of the immune system is contained in the gut. The healthy bacteria also help digest and absorb nutrients, while fighting infection and disease. It also contains potent antioxidants that not only prevent free radicals from damaging cells, they also prevent inflammation that is at the core of many serious conditions.

Keeping your digestive system healthy is a high priority.

As noted before, it boosts the health of the digestive system. There’s a lot of discussion today about the combination of bacteria, yeast and other microbes that create the ultimate healthy group for digestion. The answer that always occurs is that there is no one combination, but rather a broad view of the ratios that help people stay their healthiest, each person has different needs. However, even with that broad view, it’s also known that too much yeast causes Candida and the health problems that occur with the overgrowth and too many pathogen—bad bacteria—cause illness. Like yogurt, kombucha can create a healthier balance.

There’s research that kombucha may actually be helpful for diabetics, contrary to previous belief it should be avoided. It should be kombucha with a lower amount of sugar. If it’s made from green or black tea, it actually is more efficient at providing protection than the actual tea from which it’s made. It can help kidney and liver functioning, slowed the digestion of carbohydrates and reduced blood sugar levels.