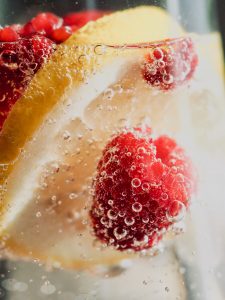 There’s nothing wrong with drinking regular water. In fact, it’s good for you and for some people, their drink of choice. However, those zero calorie-sparkling water drinks add a bit of glamour and mouth pleasing diversity to the mix. The question is whether they’re healthy and whether they adequately hydrate you. First, look at just what sparkling water is. It’s nothing more than regular water infused with carbon dioxide gas.

There is one risk that’s known when drinking sparkling water.

That risk is to your teeth. While sparkling water may quench your thirst and provide hydration, that bubbling brew may actually cause dental erosion. The combination of water with carbon dioxide creates a weak acid called carbonic acid. It’s that tingle that makes it harmful. The pH of sparkling water is 3 to 4 and causes a slight burn. While it can cause tooth enamel damage, it’s slightly more than plain water, yet a lot less than sugary drinks like cola. Unlike cola, which also negatively affects bone density, sparkling water doesn’t cause any negative changes in bone density.

The amount of sodium in sparkling water also varies from brand to brand.

If you’re enjoying a glass of Perrier, you’re consuming about 2mg of sodium in every eight ounce serving. Natural sparkling water contains sodium, plus a number of other nutrients. One study found that women who drank this type of mineral water didn’t have any negative effects, however. In fact, a study in the Journal of Nutrition showed a liter a day lowered the bad cholesterol levels and a lower incidence of heart disease in women.

If you simply don’t like regular water, carbonated water may be a good alternative.

While you do have to ensure that the manufacturer isn’t slipping in harmful additives like sugar, there are a few health benefits for drinking carbonated water. Small studies are finding that not only lowered bad cholesterol levels, it also benefited swallowing. It stimulated the nerves used for swallowing, especially if it was cold. It also aided people that had to continuously clear their throats.