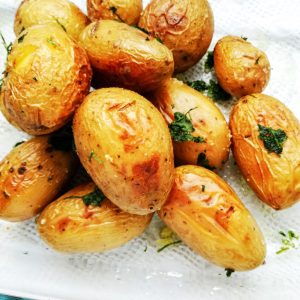 Whether you’re in a home in San Antonio, Texas, or a restaurant across America, there’s a keen focus on main dishes and soups that start with potatoes. It’s one of America’s favorite foods. While potatoes aren’t the healthiest option for those with diabetes, it doesn’t mean you have to completely give up potatoes. Potatoes do have many health benefits. They are a good source of fiber, rich in B vitamins and potassium. While they are high in carbs, there’s no reason to assume you can’t eat them if you’re diabetic, but do have to consider many things, especially frequency, serving size, preparation and the effect on blood sugar levels.

Potatoes, like all carbs, can cause an increase in blood sugar levels. As they break down, they become simple sugars and when those sugars end up in the blood stream, they can cause a spike. In most people, it’s not a problem, but for diabetics, the process doesn’t always occur as smoothly. The sugar remains longer in circulation without entering into cells. That can lead to high blood sugar levels and poor management of diabetes and complications.

You need to consider the entire diet when considering potatoes.

The potato isn’t the only carbohydrate in the diet for most people. There are many other types of carbs and it’s the total amount that needs to be considered. You also have to consider how the potato is prepared. If you ate it raw, you’d only have 11.8 grams in a half cup serving, while microwaved potatoes contain 18.2 grams and deep-fried (America’s favorite French fries) contain 36.5 grams per half cup.

Consider the potato as part of your meal when calculating carbs.