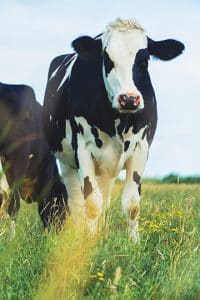 There are people who believe that drinking raw milk or consuming raw milk products like cheese and yogurt is more beneficial for health, while others, including the CDC, suggest that drinking raw milk can be dangerous. Raw milk is milk that isn’t pasteurized, heated to 161 degrees for 15-20 seconds to kill bacteria, or homogenized, put under pressure to break up milk fat and gives it better consistency.

Advocates of raw milk believe it’s easier to digest for those lactose intolerant.

If you’re lactose intolerant, you don’t produce enough of the enzyme lactase to digest the lactose, a milk sugar, to digest the lactose. It then ferments in the bowels causing abdominal distress. While raw and pasteurized milk both contain the same amount of lactose, pasteurizing does reduce the amount of lactobacillus, the bacteria that produces lactase and aids in digestion. In theory, it should make a difference, but a study showed it didn’t.

Not only do they believe pasteurizing depletes the milk of vitamins, minerals and carbs, but also of fatty acids and proteins. One meta-analysis of 40 different studies found there was a loss of water soluble B vitamins and C, which is already minimal in milk. Fat-soluble vitamins A, E, D and K also decreased, but it was extremely minor. The fatty acid profile and protein profile remained the same, since both are heat stable. In fact, pasteurizing may actually make the fatty acids easier to digest.

One thing missing from pasteurized milk is harmful bacteria.

Before pasteurization was discovered, bovine tuberculosis spread dramatically in both Europe and the US. In a 25-year period in the early 1900s, over 65,000 people died from dairy contaminated with harmful bacteria. Milk is a good medium for bacteria to grow and it comes in contact with a lot of potentially contaminated equipment before it reaches your table. It can contain a wide variety of bacteria, including E.coli, Listeria and Staph aureus. It can cause Guillain-Barre syndrome, miscarriage, hemolytic uremic syndrome, chronic inflammatory conditions, reactive arthritis, and occasionally death. People at higher risk, like older adults, children, those already weakened and pregnant women.